I’m typing this one at a little open bar veranda café place run by an 81yr old French man with his 40yr old Vietnamese wife. I’ve had my delishous iced coffee - ca phe sau dat (ice coffee with condensed milk), and have had a little western indulgence of ‘museli and freshmilk (cornflakes in something which is not cows milk).
Last night was very interesting, actually all of yesterday was very interesting! 4 of us went on a walk to the town, but it was too hot and too far so we had to catch  taxi in the end. we walked over the river and came across another world.... 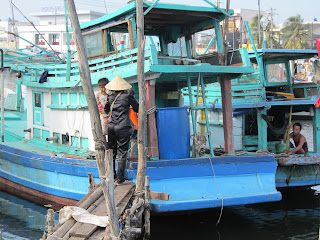 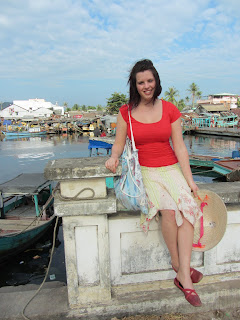 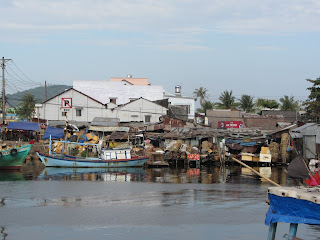 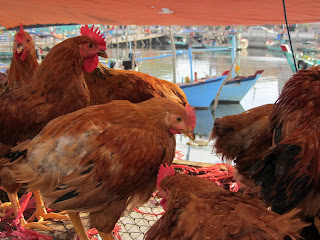 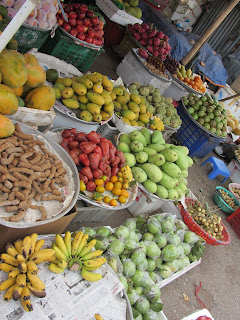 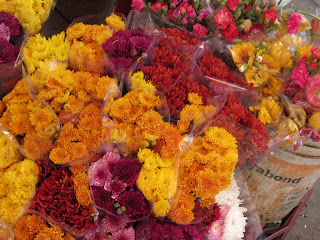 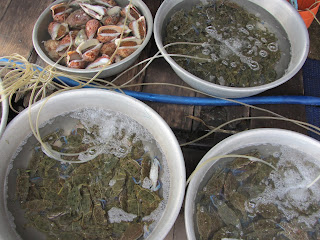 rusty tin roofs, boat houses, bowls on the pavement full of wriggling seafood, lots of neatly piled organised litter, lots of staring locals, chickens tied onto cages with string...
there was so many colours and smells again it was overwhelming.
I bought my first Ban Mi (a baggette filled with pate`, meats, mint leaves, and pickled veg) it was delishious and only 10 000dong (less than 15p).
We bought some flowers for ms Jenny to say thank you for our evening, though what it had in store we had no idea!
the 6 of us waited for her and her husband in the foyer of the hotel and they bought us over ice cold beers and sticky ginger sweets and jellied coconut which you eat before the main meal apparently. Then they cmae ot sit with us and we took lots of photos. 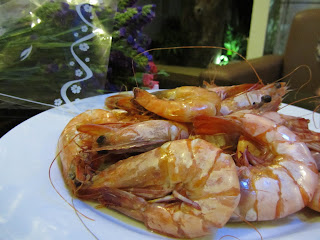 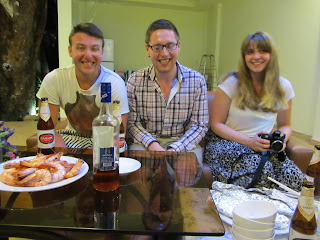 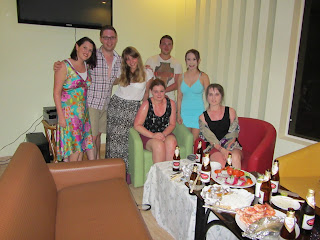 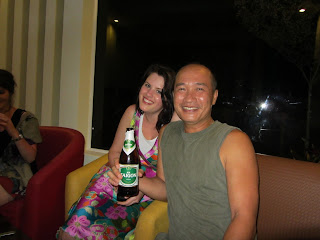 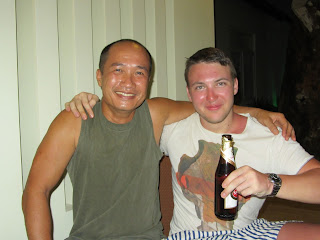 Jennys husband is 53 and she is 34 they seemed very pleased about this and wanted us to guess his age... her husband was also a Vietnamese war movie star apparently and it wasn’tlong before they told us all about his first wife,how he only likes beautiful women, o and how he gets very jealous and beats her... so unsure how we were meant too react to this revaltion... but the custom here is when anyone says anything funny/clever everyone falls about laughing says ‘yo’ (cheers......
30MINS LATER
sorry got totally distracted because a little Vietnamese toddler climbed up on my lap and we took some photos on my laptop webcam... 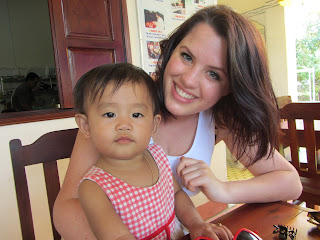 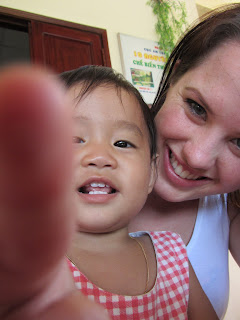 anyway, we seemed to be cheers-ing and yo-ing left right and centre and very odd things. jenny was teeling us girls not to have se with a man for 2yrs until you make him buy you a house and a car and you get the ‘moneies’ through away the love she said. you need cash, and don’t be getting married and ‘borning the babies’you must become ‘the darling’ not the wife.... anyway it was fascinating. eye opening.
then she wanted me to marry her husbands son and they called him up on the phone so I could speak to him - lots oflaugher... then they called me ‘daughter-in-law’ all evening. then they decided to maryr maxim off to the daughter and called him son'-in-law all evening. it was very funny, though we did shake hands and ‘yo a lot’ - hopefully all in jest!
we had the biggest prawns I have ever seen and beautifully moist fish, with mango and dragonfruit.
then we did shots of rice wine - one cup for the boys, one for the girls.
then we said goodnight to jenny and ‘father-in-law’to go for a midnight swim and debrief on the evening....
I better go- we are planning what do next. catching a boat to some beaches later
xxxxxxxxxxxxxxxxxxxxx
Posted by AnnabelleEatingStrawberries at 22:01