After my quiet little day yesterday the girls are I were invited out for dinner with Candy, her husband Arnt (?) and Tugn (the Danish-Vietnamese guy who lives upstairs). We had to go on the back of their bikes though.... 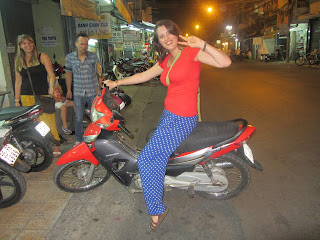 Sophie opted for Tugn - least experienced but speaks English fluently.
Julianne opted for Candy - hoping a female driver might be kinder...
I opted for Arnt - who doesn't speak any English but would I guessed was the most experienced driver
(Laura stayed at home for a bit of r&r)

Needless to say we were all terrified! 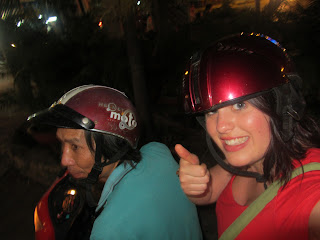 But the roads were actually (relatively) quiet and our drivers were very careful.
After the first 10mins of clinging on for dear life and laughing like maniacs we really started to enjoy ourselves! 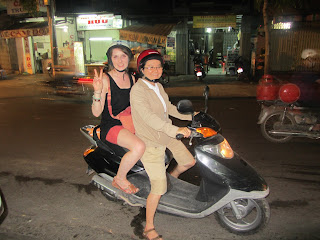 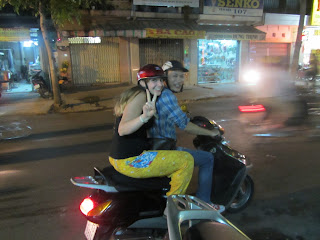 We drove for about 20mins to the first location where we had the BEST Pho Bo ever. I decided to count how many westerns we saw all evening as I had a feeling it wouldn't be very many... We saw none! Not even on the roads! Everywhere we went a little tittering crowd formed to watch us eat it was very funny.
Next we wizzed off to food location number 2 where Candy ordered us some sort of assortment of jellied squid things... the texture made them pretty hard to swallow.... Sophie was not a fan so I tried to eat her portion too... thank  god for the beer to wash it down! 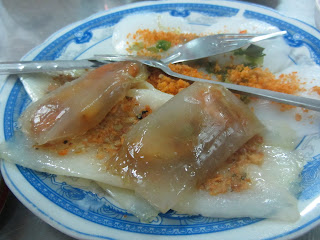 We also had these leaf wrapped meat moose things... Called ' daarrrrhh'. I liked these a lot! 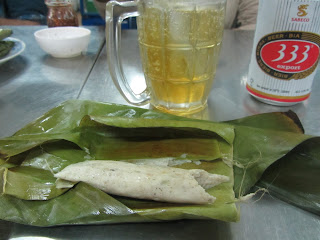 Then Candy took us to where her old primary school was because there is a tiny little café there which does really yummy fruit ice smoothie type things. There were so many different types of fresh fruit I had never tried before. I also tried my first jack fruit - this smells like horrible gone off cheese and drains but tastes really good if you can get beyond the smell! 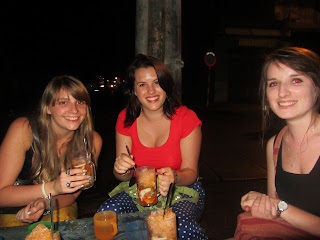 We also had a really interesting conversation with Tugn. He told us he lived in Vietnam as a child but his family wasn't well off so he was sent to a Danish orphanage where his foster mum, a government official, thought 'he looked cute' and adopted him. he is now back in Vietnam after 25yrs away. he also told us we should try giving private tuition English lessons as it would be an easy way to teach and make some money which is with bearing in mind.Tugn also tried to teach us some Vietnamese but the accents are really hard to hear and if you get a word even a tiny tiny bit wrong the Vietnamese don't understand you at all. but once you get the hang of that the language is meant to be very easy - there is NO grammar! and NO tenses... Which is going to make teaching English hard...