We made it to Phu Quoc island! Was a right palarva as expected! Had to catch a taxi to some distant suburbs of siagon, then wait at an overnight bus station full of Vietnamese staring at us. went with julianne and laura with the plan of meeting up with sophie, craig and maxim when wee got there. then we got on this ‘sleeper bus’.... all the Vietnamese were pointing and very obviously talking about us as we were the only whites on the bus! I have just started to do the little two finger peace sign Asian wave at anyone who looks at me - they seem to like that a lot 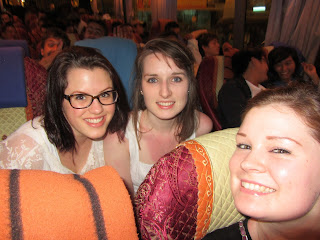 After 10hrs on the coach where I slept for about an hour but was very happy just looking out the window in my recliney chair we arrived at another bus station in Ha Thien. then we were told we were going to have to get on the back of a motorbike. with all our bags. we were like no way jose. so we had to wait for the taxi service to open (because TET is still going on lots of places are closed still) which meant we hung around the bus station for 3hrs till 7:30am and then got the taxi to the boat station port thingy... and THEN waited another 3hrs for the boat! I had the BEST iced coffee from this tiny little shack for about 10p though. 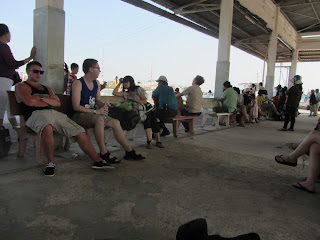 sadly we were not allowed on desk on the boat and had to watch a film of some really dogdey Vietnamese theatre production.... when we finally docked I threw up of course!
then we caught a taxi who totally ripped us off (he was going to charge us $6 but I got him down to $3-but it was still too much really), we picked up some candians on the way who were peace corps in china... made me feel SO glad i’m not there... it sounds rubbish!
FINALLY arrived. it is paradise though 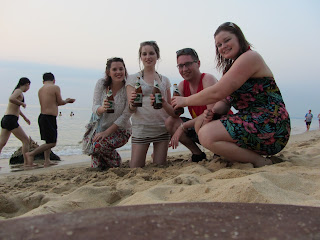 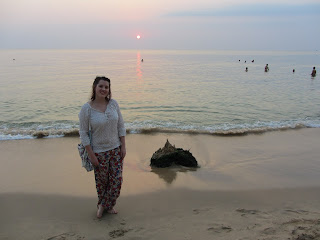 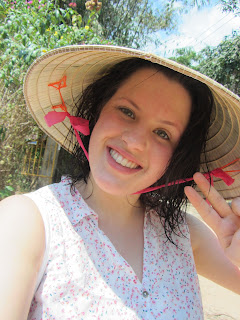 We are staying in a brand new hotel with ms jenny. She is lovely. I have been chatting with her a lot - she also said her friends thought I was the most beautiful

yay old Vietnamese men! h haaaa, this was in contrast to this other woman who came up to me on the beach yesterday and felt all the girls legs and then told me I was hairy and needed threading! cheeky minx!
we are only a 3 min walk to ‘long beach’ and have stumbled across jennys brothers bar which does beer for 30p and the food.... I had a squid and mango salad yesterday with minty basil it was amazing! then for dinner I had squid in lemongrass and chilli because the crab in coconut was all sold out...  what a hardship...
Posted by AnnabelleEatingStrawberries at 20:46